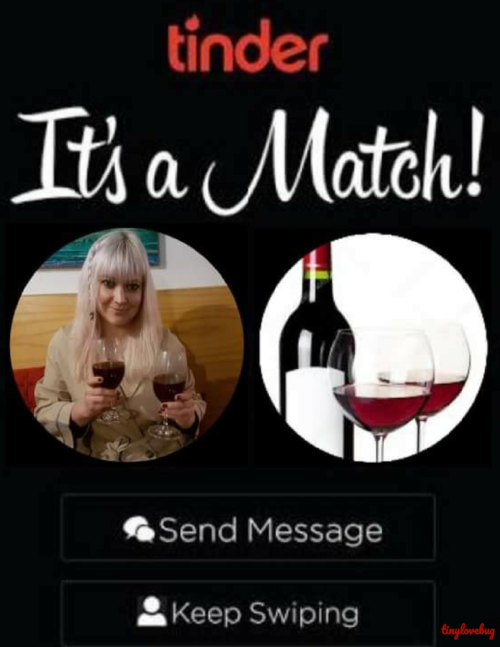 Uggggh. Meeting people. Just uggghhhhh. Sorting the wheat from the chaff can seem like an impossible task with so many douchebags out there. Luckily, modern technology has managed to concentrate all those douchebags in one spot, known as Tinder. This is both a blessing anda curse, it can be hard not to lose hope when you are confronted with so many profiles that bring to mind the phrases like ‘maybe dying alone isn’t so bad’, ‘has that line EVER worked’ and ‘what the actual fuck’ or just *cringe*. But don’t stress, TLB is here to help, with some hints on how to decipher the meaning behind the animal mating rituals that make up Tinder.

As much as we assert that we are interested in finding a man with a good personality, who really has his priorities in order…. Who are we kidding? Of course, the first thing every gal will check is the pictures.

The man with a cute dog/cat picture is now so prolific on Tinder that it’s practically de rigueur. The dog pic is supposed to show you that he is sweet and loveable guy just casually chilling with this adorable puppy that he most likely borrowed from a random stranger at the park. The puppy pic is so popular because IT WORKS, but make sure you get confirmation that it is actually his pet before you agree to meet in person, demand proof of ownership. We all know it’s the animal you are really swiping right on.

If he doesn’t have a cute animal pic- why not? What’s wrong with him? He couldn’t find one person willing to lend him a puppy for two minutes to take a pic with? He doesn’t like cute animals? Almost definitely a psycho.

A hat or beanie in every picture, I think we all know by now that this is to disguise a receding hairline or baldness. But men have caught on, more of them have realised that we know what they are up to. So now there are a few less hat pictures, and more pics where the offending cranium has been carefully cropped out. So be on the lookout for weirdly cropped pictures, if a full head of hair is something you are into.

No Picture or Very Blurry Picture

Listen, everyone, and I mean everyone, can take one semi-decent picture. When the stars align and the lighting is just right, and the earth tips on its axis just so…. Even I have a pic that looks amazing and I will probably use as my profile pic across all my social medias until the end of time. If there is no picture or just a single very blurry pic, he is either currently in a relationship or a serial killer. Probably best to swipe left.

The Picture with Girls

The picture with girls is concerning on two levels. The first type of picture is one in which your man is surrounded by a gaggle of total hotties. He is trying to say – ‘look at all these extremely attractive females that I could be potentially mating with’. Don’t fall for it – it’s a total lie. Chances are, he doesn’t even know these women who are way out of his league, and this picture was taken by a nightclub photographer, or he just jumped into a group photo at a function he probably wasn’t invited to.

At the other end of the scale is the photo where a woman has been cropped out of the picture. This guy is so freshly single (or… still in a relationship) that he hasn’t even had time to take any selfies yet. You have been warned.

Picture with an Animal Filter

Animal filter, on Tinder, really? This guy is totally a basic bitch. He also probably has more Instagram followers than you.

The travel pic is almost as necessary and pervasive as the animal pic. This says ‘I’m fun and… I have travelled. I’m totes cultured and stuff’. Be wary of too many action photos though – if he is covering his face with a ski mask/sky diving googles/snorkelling gear in every pic, there’s probably a reason for that…  Also look out for someone wearing sunglasses in every picture. It is a scientific fact that everybody looks at least 89% hotter in sunnies, so make sure there is at least one unadorned face shot so you can get an idea of the real deal.

It’s always popular to put one or two group pics in, it’s always good to let people know that you are likeable and have friends (that or mad Photoshop skills). But if every single photo is a group shot, that should ring alarm bells, what he is angling for here is the Cheerleader Effect. He is playing on your cognitive bias that individuals will appear more attractive when in a group photo. He may not be attractive, but at least he’s clever.

The Pic with the Mum/Nana

This guy is either a mummy’s boy, or more likely he is a next level player and this picture has been scientifically calculated to give you the feels in your cold, dead heart.

Any profile where the guy is pouting and/or has a topless pic should be met with a swift swipe left. This guy is a gym bro, and there definitely isn’t room in front of the mirror for both of you. Do you really want to go out with someone who is going to spend more time getting ready than you, and is probably going to spend the entire date checking himself out in the silverware? Of course, if you are just up for one night of sweet, sweet loving, that’s a different story, but don’t expect the action to match the fabulous abs if he’s in a carb-depleted state.

Even though Tinder is mostly a visual event, you can usually tell a lot about someone from their bio. That’s… kind of what a biography is. Here is a quick breakdown of some of the things you might read

He is so incredibly attractive he doesn’t need to have a winning personality or make you laugh. Don’t start shaving just yet, refer to the pictures for confirmation.

Settle down mate, we don’t need your life story. While I understand the temptation to give the world an in depth idea of how wonderful you are, there are very few people who are actually that interesting. Probably me and like… five other people.

He is tall (and apparently that’s all he needs to say to get laid). Also popular is the ‘6’2” since everyone keeps asking’ – nobody is asking, they are just trying to think of a subtle way to get that information out there. Not smooth at all.

He is either working in hospo and selling coke on the side, or a Personal Trainer peddling Herbalife. You will probably lose more weight with the coke…

If the bio is peppered with two much youthful dialect, think – bae, totes, amaze, fomo, jelly, fleek, turnt, yolo etc., they are almost definitely at least a decade older than the age they are claiming. Old people going over the top using words invented by teenagers is only kewl when I do it.

It is a truth universally acknowledged, that a single man in possession of a dating app, must be in want of Netflix and chill. And if this is all you’re interested in, awesome –  go nuts. If you’re after a little more, hopefully this list was helpful to you. Most importantly, have fun, stay safe and don’t do anything I wouldn’t do.

What do you think? Is there anything EB missed? Let us know in the comments

« What Your First Date Outfit Says
5 Kinds of Guys on the Market. Should You Date Them? »