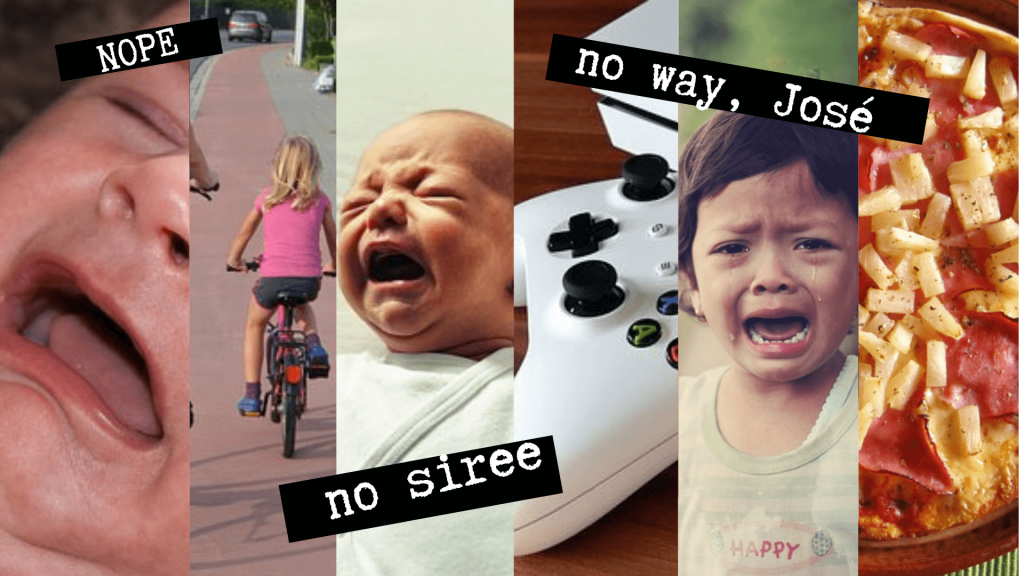 Babies are in right now. Or at least that’s what it seems like when you’re in your early 30’s and people hit that Jesus birthday (33) and start popping out kids, acting like they are giving birth to the second coming. Not that there’s anything wrong with having a baby, if that’s what you’re into.  I mean they can be cute, it’s guaranteed Facebook likes, they’re easily portable, a ready-made excuse to avoid social events, they cry and scream and seem to secrete incessantly….. actually now that I think about it they leave a lot to be desired.

I always thought dogs were a good child replacement, just like a human child but slightly hairier and with bad breath.  Of course, if you’re married and of a certain age, people start to ask questions, so I started to think about adoption (because, if you could avoid giving birth and potentially getting grade 3 tears in your lady garden…. Why wouldn’t you?). Obviously I didn’t want a small child that was going to take up a lot my time that I devote to my hobbies (watching Netflix and drinking Aldi’s wine in my underwear) and I didn’t want a moody, messy teenager hanging around (I only just grew out of that phase about three months ago, no need to live through it again…). So I decided to go older still. I decided I would adopt an adult. The older the better.

You run a big risk when you commit to living with someone with 18 years, especially if you haven’t even met them yet. What if you give birth to a total jerk? What if you spend some of the best years of your life giving your child everything, only to find out they vote Liberal? Or put the toilet paper roll on with the paper coming underneath instead of over the top? Or you could be chilling together one day and they ORDER PIZZA WITH PINEAPPLE ON IT?!?!? With adult adoption, you can get to know your potential new family member before committing to someone who lists ‘Instagram influencer’ on their résumé.

Sure I might have missed some of my son’s great milestones in life; learning to ride a bike, his first day of school, his first time sneaking out to get drunk being called at 2AM to pick him up so he could pass out in a pool of vomit in the front garden. But it also means I get many other benefits – he can be left unsupervised for long periods of time (leaving me plenty of time to indulge in my favourite pastimes – sleeping and being self-involved), he’s taller than me so he’s handy for reaching things off of shelves and changing light bulbs, and doing general handyman activities (it’s not like I can’t do these things because I’m female, it’s just that I don’t do them because I’m incredibly lazy). In fact, he’s a totally self-sufficient human being. While my friends are changing diapers and attempting to breastfeed from chapped and bleeding nips, the biggest stressor I have to worry about when feeding my son is deciding what Ubereats we both want.

The best part is my son costs me no money at all to run. No stress about paying for private school or the latest gaming system, or buying a uniform for a sports team they are only going to drop out of next term anyway. And hypothetically I have total freedom. I could go camping for a month and not have to worry about child protective services coming after me, or if I packed enough nappies. I mean, I wouldn’t because I’m not even sure how to set up the television in a tent, but hypothetically I COULD.

Some of the naysayers might say this is just a housemate situation, but I disagree. I’m proud to be a mother and I’m proud to call him my son.