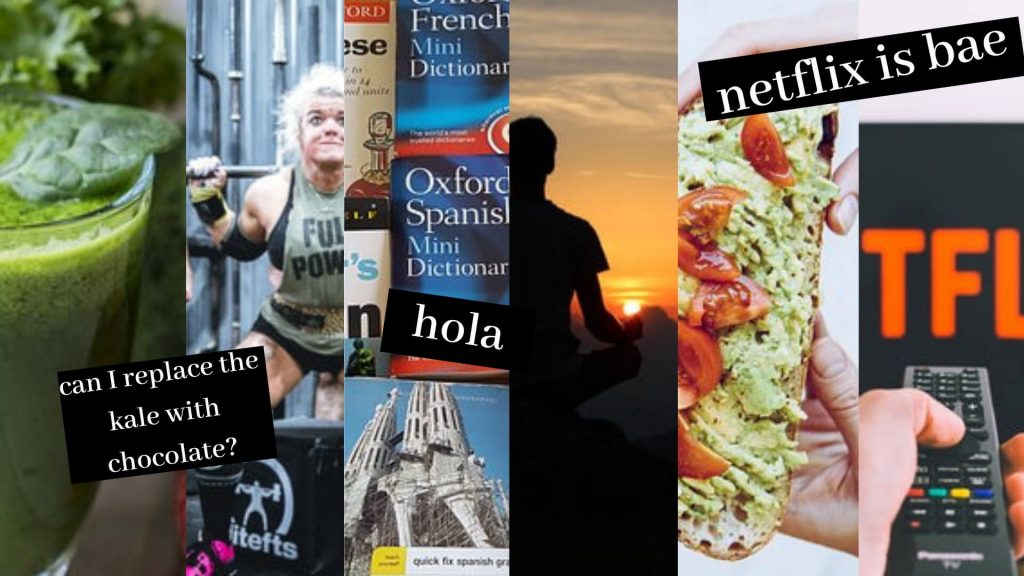 It’s that time of year again. The time of year where we are full of rash proclamations of how we’re going to miraculously change in the sparkly New Year, go out and drink more alcohol than should be physically possible, then wake up on the first with the hangover straight from the fiery loins of Satan himself, and all those good intentions gone to shit. Here are a few of the usual suspects.

Ok, so making some kind of health-related resolution is practically de rigueur. And sure, if you’re the kind of person who reaches for your runners on the first of Jan, instead of a spew bucket, then I salute you, good sir. But let’s be real, you’ve managed to survive this long on a diet that consists mainly of what you can glean from the biscuit tin at work and whatever is lookin’ fine at the vending machine, and a workout program that involves doing laps of Dan Murphy’s looking for the cheapest red (because…. antioxidants!!). In fact, you’re not just surviving; you’re positively thriving under your current regime, so no reason to change things up. Plus, kale tastes like shit anyway.

Anyone who has ever been overseas for more than 30 seconds has come back with the harebrained scheme that they will easily learn the language of whatever country they went to (or the country with the best looking men if you went to multiple places) by downloading some free app on their phones. From my studies (I used a sample size of one… myself n=1), 100% of people fail to follow through with this plan. But why not make it a bit easier on yourself? Instead of learning A WHOLE DAMN LANGUAGE, which is probably over a thousand words or something, just learn a really important phrase, something that will get you far such as ‘Un bicchiere di vino bianco per favore?’ (can I have a white wine please).

Not Eating Fast Food for a Year

Be in the moment, live your best life, blah blah blah. I feel like just by getting up every morning, I am doing pretty good. I give myself bonus points if I have a shower and/or change out of my pyjamas before leaving the house. I feel like those highly motivated people who get up at 4am to meditate and go to the gym before doing a 10 hour work day followed by volunteering at a rehab facility for puppies who are addicted to scooby-snacks are entirely fictional characters invented to make the rest of us feel bad.

I feel like the overabundance of cooking shows has led me to feel guilty about the lack of any kind of abundance of any kind of good food appearing from my kitchen. Apparently packet mac and cheese isn’t quite MasterChef level, even if I do garnish it with parsley. But look at it from a scientific perspective – if the gods had wanted me to use my kitchen for anything other than displaying my pristine condition (cough unused cough) pots and pans, then why would they have invented UberEats? Exactly.

Sure everyone has this idea in their head of the beatific version of themselves that they’d like to be, but is the benefit of doing all that nice stuff really all it’s cracked up to be? What’s in it for you? As far as I’m concerned, referring to someone as ‘lovely’ is just code that they are actually really frickin’ boring. Being a total bitch is way more fun. If anything, try being LESS nice. Smash the horn when someone cuts you off in traffic. Take that last slice of pizza. Hang up on your mate when she tries to give you the sob story of how she broke up with her boyfriend (for the fifth time). No regrets.

If marriage is so great, then why isn’t Oprah married? If children are so great, why did cats get invented? And why buy a house when you could be buying avocado on toast instead? Asking the big questions over here.

Ok, so I tried this one time for ten minutes. It was terrifying, I was all alone with my own thoughts, my heart rate sped up and my hands started to go all clammy. I’m pretty sure I could feel my will to live leaving my body. Then the electricity came back on and everything was ok. I endured this horrific agony so that you don’t have to. Stay safe and keep your appliances close at hand and charged at all times.

So this year why not cut the crap. Don’t aim high, aim low. Aim so low that you can’t possibly fail. Aim to cook one meal at home a week. Pay a compliment to one person a day, even if it’s to yourself (‘your eyebrows look amazing today Emma’ ‘thanks Emma’). Commit to stretching for five minutes a day. Set up an automatic debit to send $10 to a charity every week. Once you get the ball rolling on these little things, the big things seem slightly less daunting.

« The New Adoption
What to Blog About: How to Write What People Want to Read »